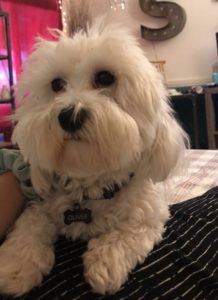 his is Oliver, my one-year-old Coton de Tulear.

A what? Okay, let me tell you for just a quick second about these awesome little dogs before I get into how the bioenrgi™ Allergy Relief chip helped my sweet boy.

The Royal Dog of Madagascar

The Coton de Tulear, or Coton, as most owners call them, hails originally from the island of Madagascar. They are named for their coat, which is naturally long, often pure white, and soft-as-cotton. They are charming, smart, happy-go-lucky little dogs that typically weigh between 8-15 pounds. They might sound dainty, but Cotons are actually known to be quite sturdy and muscular.

The breed is relatively new to both Europe and America, it didn’t actually start to become popularized until the 1960’s when French tourists discovered the breed. They are a part of the Bichon family, but there are all sorts of interesting (and maybe outlandish) theories and stories that describe how the small dog came to arrive on the island of Madagascar. If you’re interested in learning more about how the Coton’s ancestors were thought to maybe be seafaring pups that swam ashore after a shipwreck and mated with the island’s local feral dogs to create the “Royal Dog of Madagascar,” check out the breed’s page on the American Kennel Club’s website.

I want to talk about my dog, Ollie. I first noticed Oliver’s symptoms when he was young. He started biting at his paws a lot, and it was really distressing because he would just bite and gnaw and whimper without stopping. No one likes to see their furry friend in distress I started to do some research.

Coton de Tulears are hypoallergenic dogs, but that doesn’t mean they are immune from suffering from allergies themselves, and sadly I realized that was what was happening with Ollie. Along with the biting or licking at his paws and frequent sneezing, he also had occasional diarrhea and very runny eyes. Eye tears are common for Cotons, but his were excessive.

I wasn’t a fan of the idea of giving him medication, mostly because I couldn’t really be sure what was in it and what kind of side effects there might be, so I felt stuck. I didn’t want him to feel bad or suffer, but drugs and chemicals found in medications made me nervous!

When Oliver first started using the bioenrgi™ Allergy Relief chip I had just taken him to the groomers, so he was freshly washed and free of any eye stains. I almost immediately noticed a difference in his allergy symptoms. His eyes remain clear of tears, he doesn’t gnaw on his paws daily basis now and I hardly ever hear him sneeze. He only seems to have issues after spending a longer than normal time outside, like when we take walks to the dog park to play.

I love this patch because it really does make a difference in Oliver’s allergy symptoms and I love knowing that I don’t have to worry about drugs or chemicals since the patch is natural, using frequencies to work with his immune system.

Another plus was it was super easy to use! All I had to do was attach one of the patches to the tag on his collar and then I almost forgot it was even there except for him seeming to feel so much better!

I would recommend the Allergy Relief patch to anyone with a pet suffering from allergy symptoms. It’s a great alternative treatment to drugs and medications. If you are like me, you’ll appreciate knowing you are giving your pet a non-invasive and natural product that is easy to use.